Fashion weeks.  You either love them or you hate them.  In my world, they are simply part and parcel of what happens twice a year and have been part of my professional career for 12 of those years.

For me, the most baffling part of this bi annual charade is the question of the FROW (Front Row) and who is ‘worthy enough’ to be there?  For once you go frow, you don’t you can’t you won’t ever go back.

Not too dissimilar to being awarded a Michelin star.  Once given the accolade you have to fight to keep it.

What is interesting though are the times at fashion week when you come across someone sitting front row who you know instantly is just not meant to be there.  Be they too young or too old, not being photographed enough or wearing last seasons bag with last years iPhone 5c Just looking, well, out of place.

This got me thinking about Islington’s new gastro gaff 1251 set up by head chef and one to watch James Cochran. With his ‘cool guy’ quirky style he definitely makes for target front row material.

Originally from Whitstable in Kent, James started his career working at the ‘Wheelers Oyster Bar’.  From here he ventured to London where we worked up the ranks at London’s 2 star The Ledbury for 5 years until he finally felt ready to achieve solo status and opened James Cochran EC3 in November 2016.  The restaurant came with mixed reviews (namely from the Guardian) and James left his name sake and opened 1251 in August this year.  You may also recognise him from this year’s Great British Menu (listed as a favourite one to watch).

The restaurant itself is situated on quite an odd site I must say. The busy main road of Upper Street.  It took over from an old Chinese Laundry and with its narrow facade and small signage it could easily be missed in one’s pavement viewpoint.

However, Jimmy and I scuttled in from the rainy street with hungry intrigue.  On entry, you go through a glass door and then another glass door where you come to 3 cramped tables in the bay of the window at the front.  There is a bar and then more tables at the back of the restaurant which interestingly showcases other furniture (of lesser means) demonstrating some classic catwalk show low rank to high rank seating. 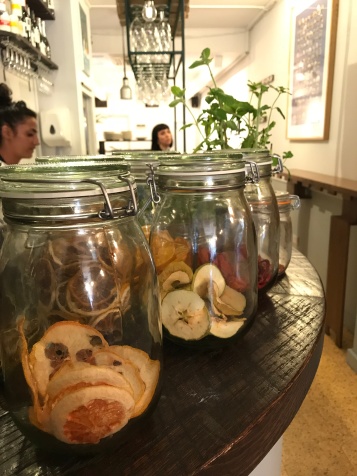 There is also an immediate staircase upstairs which I assume is for larger parties or private hire as James himself was seen carrying plates up there most likely to give the full gastronomic experience.

We sat down and looked at the menu.  Obviously, we were instantly taken.  Pickled crab, confit cauliflower, line caught mackerel, I mean the dream.

However, first Jimmy and I ordered the bread on offer.  Out came a regal looking large slice of homemade soda bread whose aroma was sweet and intoxicating rather like the bread version of a just baked chocolate cake out of the oven.

I love dense dough for all its indulgence (airy crumbly breads are not my style) so I was instantly taken with this.

We were told the menu is laid out in reference to how hungry you are;

You can imagine what Jimmy I went for.

I started with the confit cauliflower as my snack with fermented bagna cauda.  This is an original 16th century Italian dipping sauce made from anchovies, garlic and olive oil.  It added an interesting element to the dish.  The cauliflower was soft and slightly charred where needed with a gentle heat. It was delicious.

I then had the line caught mackerel as my first plate.  The fish itself was cured and then finished off with a blow torch to crisp the skin.  The curing texture I found slightly off putting at first but as I eased into each bite I learnt to love it.

It was served with an XO sauce which is Chinese and whose origins come from Hong Kong. It is now commonly used in the southern Chinese regions such as Guangdong province.  It is a hot chutney (for like of a better description) style accompaniment and is made from dried scallop, chilli peppers, Jinhua ham, dried shrimps and garlic.

On top of the fish sat some bright pickled cucumber adding some needed crunch and sharpness.  The dish was sweet, sour, spicy, a real party for the palette I thoroughly enjoyed it. 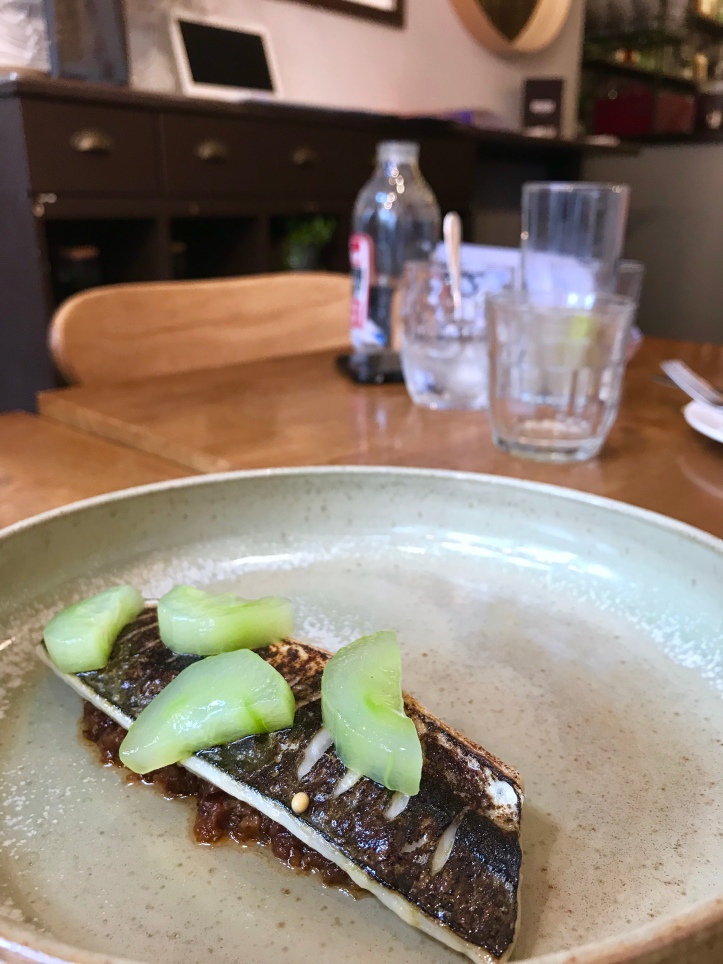 My second plate was the jerk spiced hake served with iceberg lettuce, watermelon and seaweed yogurt.  The hake was perfectly cooked and spiced and the iceberg added a little crunch. However, the watermelon wasn’t needed as it overpowered the other flavours.

Alongside the iceberg and the yogurt when the watermelon pops it all just become too liquid in your mouth.

Jimmy had more of a meat feast.

***Point to note: Originally Jimmy wanted to have the main goat dish (as seen on GBM) which is recommended for 2 people. However, as I am not eating meat at the moment sadly he couldn’t have it.  Realising the disappointment (and perhaps my foodie photo taking) the waiter gave us a small jug of the scotch bonnet marinade or sauce that is served with the goat so we could at least try it which I thought was a great touch.  It was sticky, hot, sweet and delicious***

Starting with the buttermilk rabbit which arrived in a popcorn style pot was cool and Jimmy loved it and also some potato crisps with Whitsable oyster cream which were fun and flavourful. 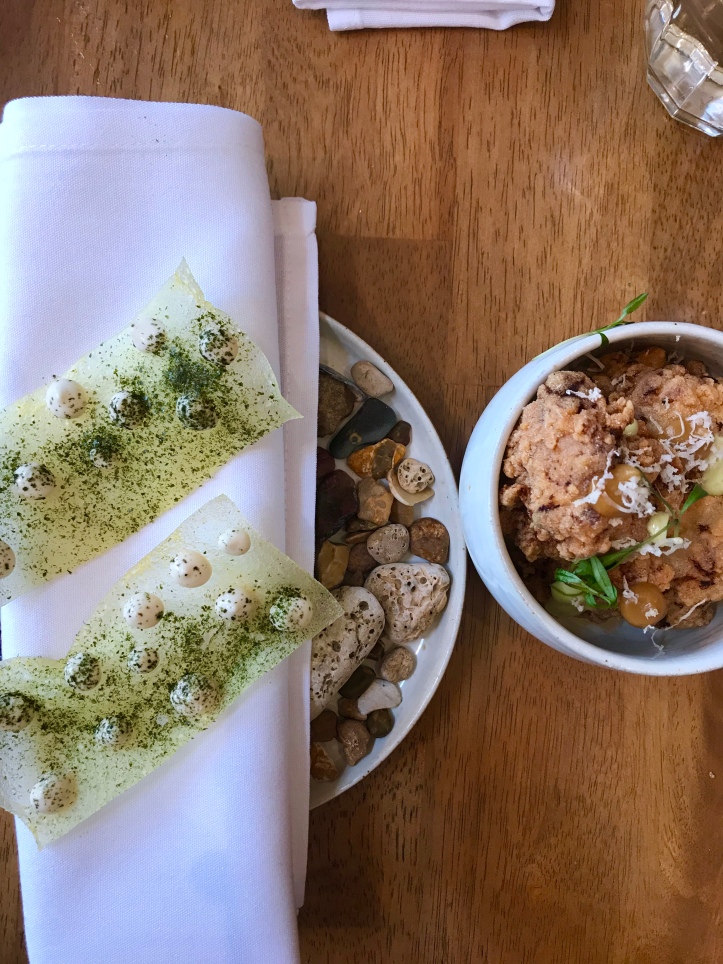 Then he had Organic Kent Pork, smoked eel and turnip which he said had good flavour but the pork was a bit dry. 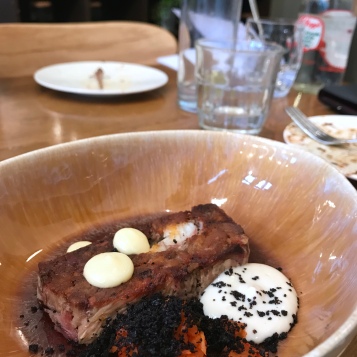 Then onto the BBQ wood pigeon which he said was disappointingly overcooked.  Interestingly though, he also commented saying that “should the pigeon be cooked to perfection, I’m not overly taken with the dish”. 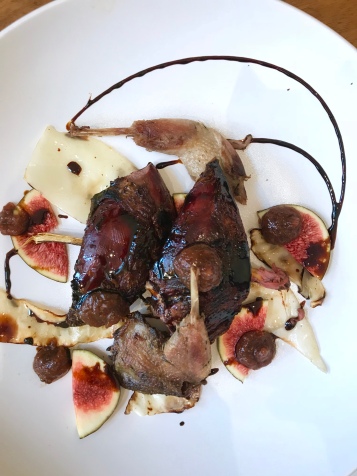 The puddings, however were ultimately the closing looks and stars of the show.  Salted caramel ice cream sandwich which in the words of Jimmy was a ‘wind up’ and a toasted oat custard tart which was up there with the best. 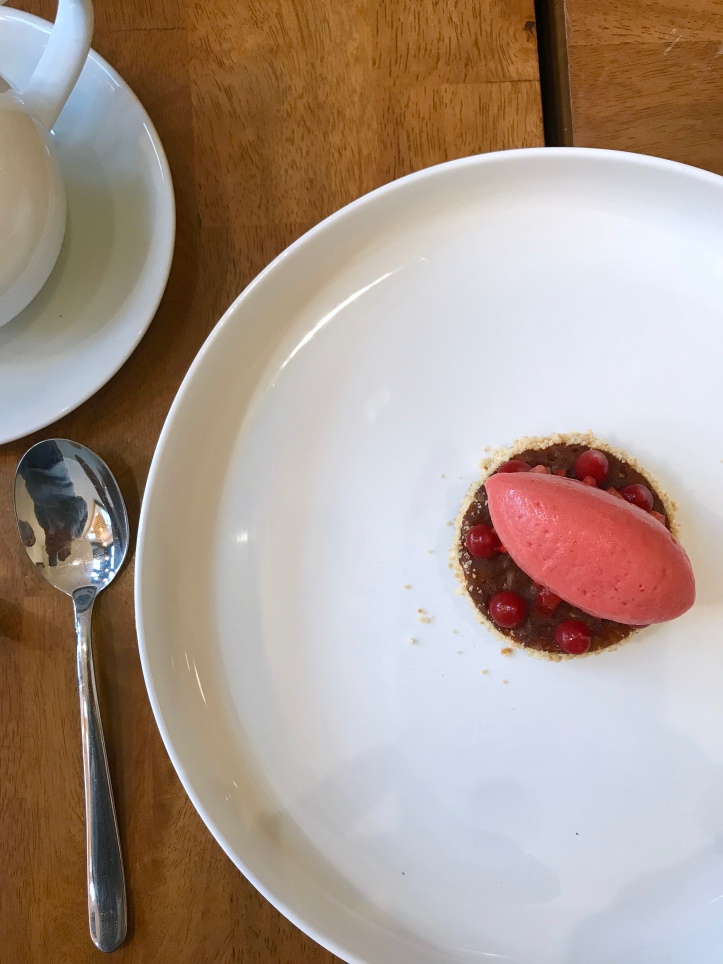 The thing that sadly let this restaurant down though was the service.  Although I understand the certain creases of a new restaurant that need time to iron out we were left with dirty plates for 10 minutes too long at the end of our lunch, too much to bear that I piled them myself on the table. We alerted one of the waitresses who just said “in a minute” whilst she cleaned an empty table.

I like a relaxed environment, I really do. I’m not a regular white table cloth ‘all eyes on you’ kind of diner by any means, but this was slightly too relaxed. 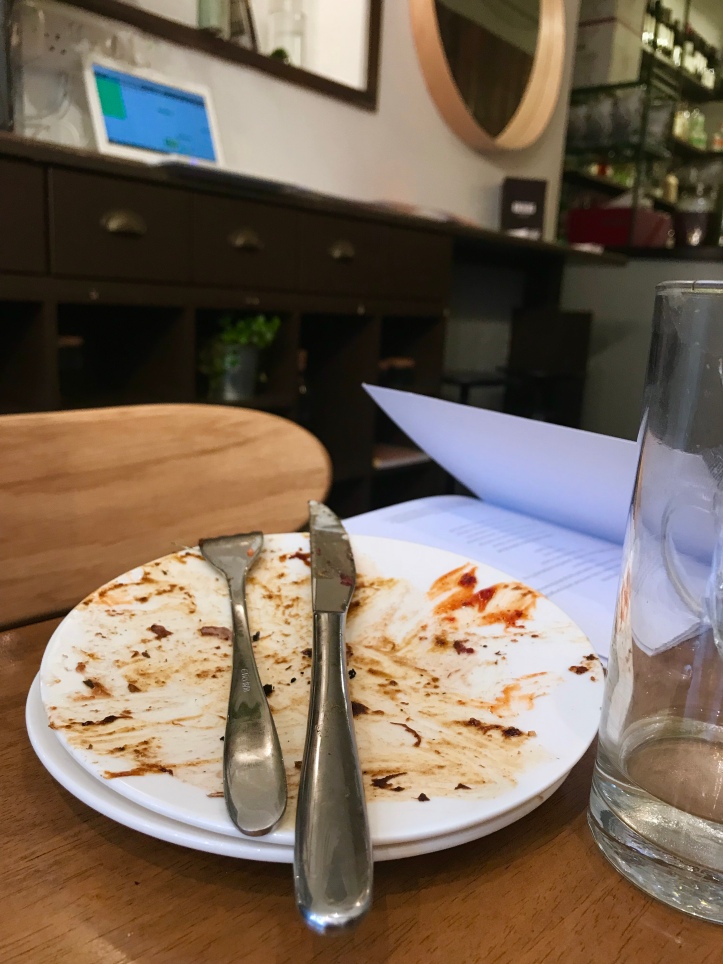 Then the door to the street kept being left open and swinging open which was letting in Baltic cold air from outside which was truly uncomfortable and off putting and again was something I kept having to close. The waiter and waitresses also had terrible trouble struggling to carry plates and drinks upstairs whilst also having to open and close the door to get in and out of the main restaurant. This created a tense and chaotic environment.  The whole restaurant lacked that effortless, seamless functionality that is mandatory in creating a good restaurant.

So, although James himself would firmly sit ‘frow’ next to some of his dishes, his restaurant would be the stand out ‘not meant to be there’ figure that should be sat 4th row at the back or evening standing…

James is obviously a creator, a visionary and has a huge talent when it comes to food but maybe his restaurateur skills need some alternations backstage before hitting that front of house runway.