Charles Dickens once wrote ‘It was the best of times, it was the worst of times’.  He was surely referencing having builders in his house at that time right? The anticipation of the finished result versus the living hell reality that it takes to get there.

Jimmy & I (more Jimmy than I truth be told as I have been in Bali for the past 2 weeks) have been living a ‘half life’ whilst our flat is being redecorated.  Exciting but hard to say the least.

We are abundant with all the typical annoyances that home decorating builders create.  Those such as dust, dust sheets, plastic, plastic covered furniture, no furniture, junk piles, paint pots, paint brushes, no access to basins/cupboards/ your pant draw, loss of possessions, panic attacks, panic attacks at the state of the bathrooms, and the showers, not to mention the “will this torture ever end” daily depressive state of mind mid 7:00am alarm clock…the works.

I sometimes try and put myself into the minds of the builders.  I wonder if they recognise the pain we are going through?  I know they are doing a job (and a good one at that) but I wonder if they ever think ‘wow, it must be pretty annoying that I’m scooping up these nice people’s things. Putting them into a hectic pile of disorganised chaos whilst having no clue as to where I put them back afterwards.”

This got me thinking about where we had lunch over the weekend.  (As I’m sure you’ve guessed our kitchen is temporarily out of action which is absolutely fine with me as we’ve been eating out more….more than usual anyway!)

Jimmy booked Rovi which is the new restaurant opened under the famous Yotam Ottolenghi. 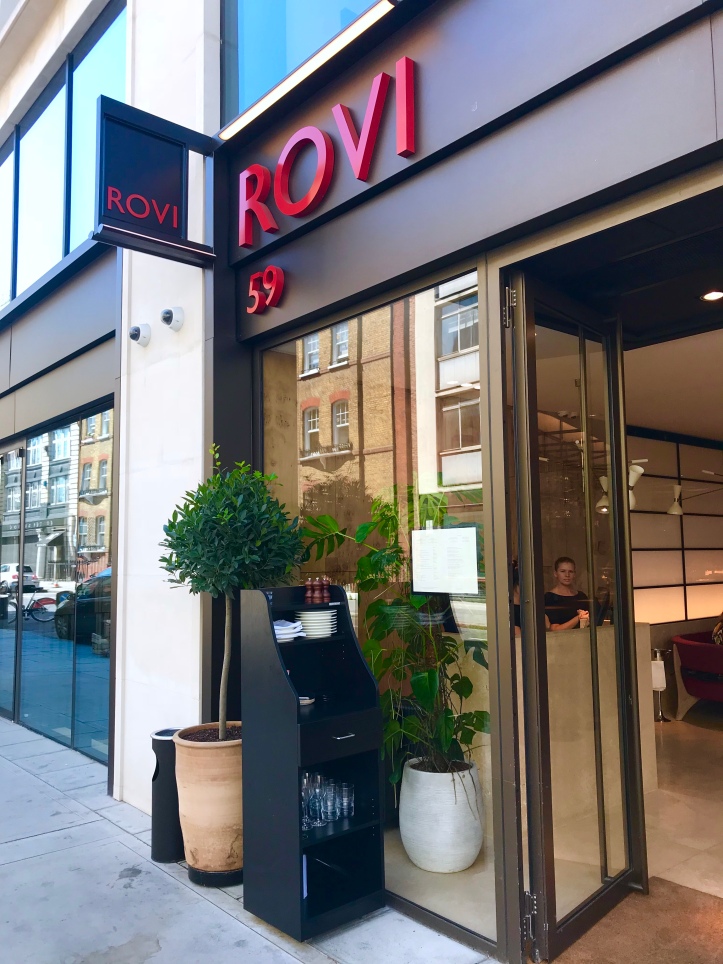 Situated on Wells Street, Fitzrovia, my first impression of Rovi was how out of place the street furniture seemed to be on that particular road.  The chairs seemed oddly too happy for its seemingly drowsy, beaten up surroundings that is Fitzrovia. 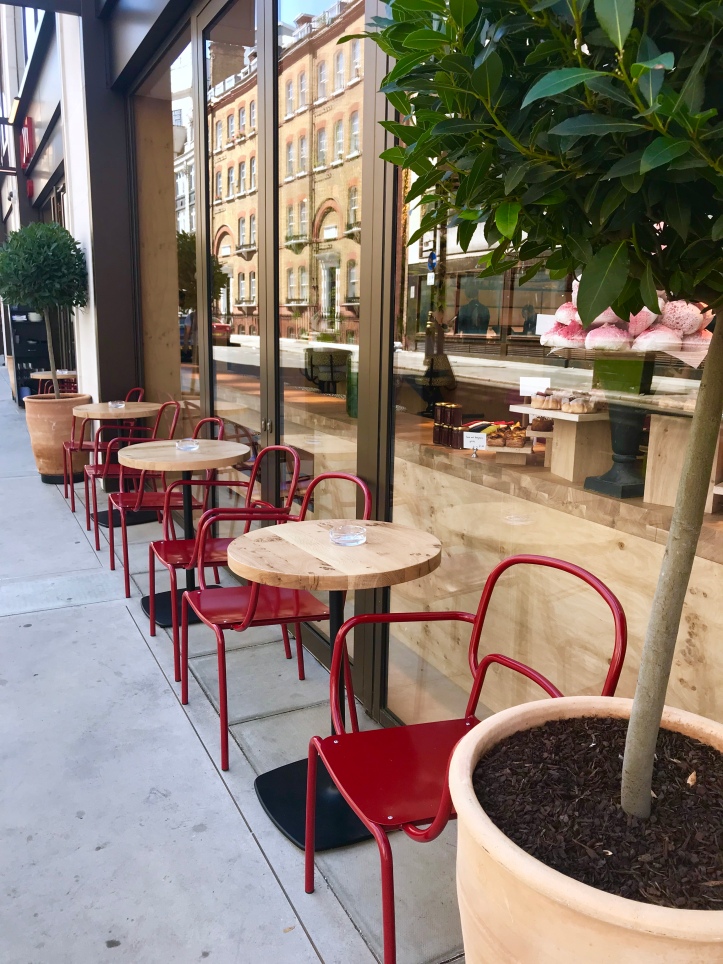 We walked in and were hit with an instant burst of light and energy.  The place was really buzzing, and colourful and bright.  It changed me from a negative Nancy into positive Poppy within seconds of being there.

We were shown to our table and given the menu.

Totally up my strasse! 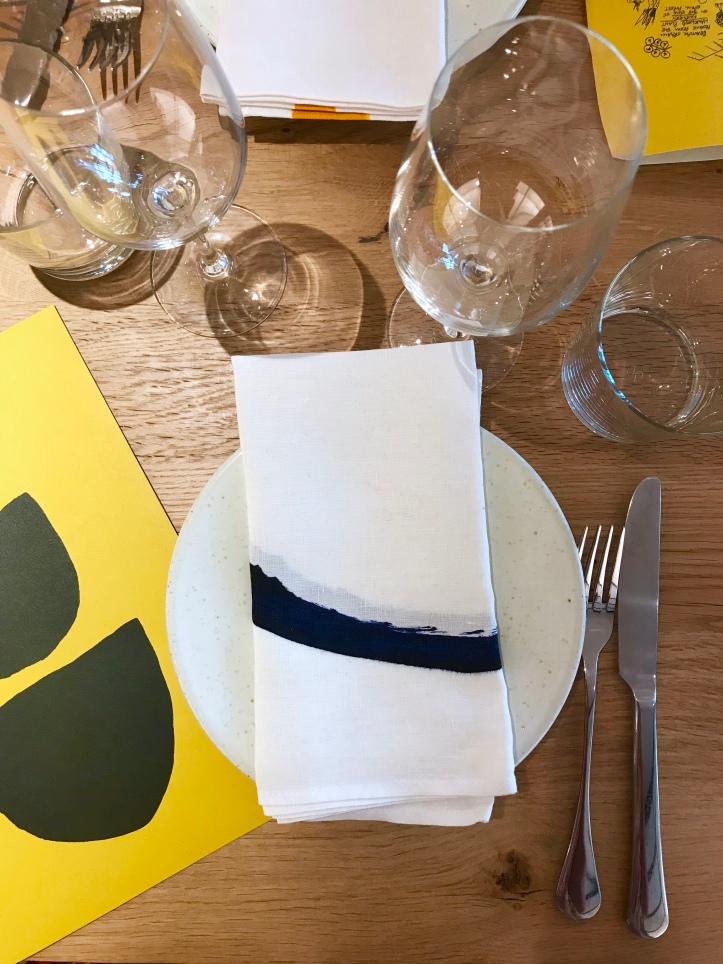 Vegetarian starters, grilled fish, skewed meat, not to mention an array of yogurt dips, spices and other ingredients i’d never heard of and words I couldn’t even pronounce which is typical of Ottolenghi recipes and what makes them so exciting.

First to the non alcoholic cocktails.

The best I’ve had to date.

I went for ‘If you Like Pina Colada’ which was pineapple, cinnamon, coconut water and agave.  It was truly delicious and felt like a real treat for a Sunday afternoon.  Jimmy had the Rhubarb Kombucha which he quite aptly stated was ‘just a normal good Kombucha”. 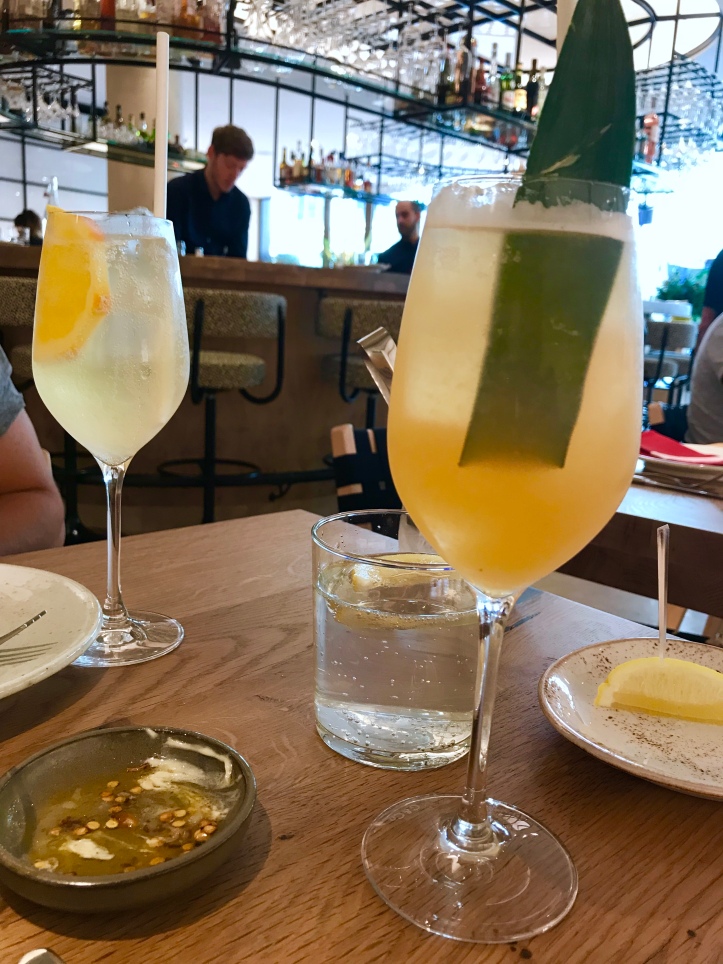 (Point to note:  The best bit about the drinks though was how Rovi brought the side of lemons.  Jimmy and I drink a lot of sparkling water in restaurants and we always order either lemons or limes to squeeze into the glasses and there is nothing more annoying than limp thin slices of lemon which are so awkwardly unsqueezable as they are so thin. You try to squeeze and it all turns to mush in your hand, then the pips fall in your water glass and you have to fish them out with a spoon, or worse, your fingers. Then you can’t seem to do it. Then you lose track of the conversation because every inch of focus is going into trying to get the pips out of your long glass, I mean the whole thing’s a nightmare.  However, Rovi give you sturdy thick chunks of lemon with perfect surface area for the thumb and finger grip. Tick.  And they remove the pips prior to serving. (Double Tick.) 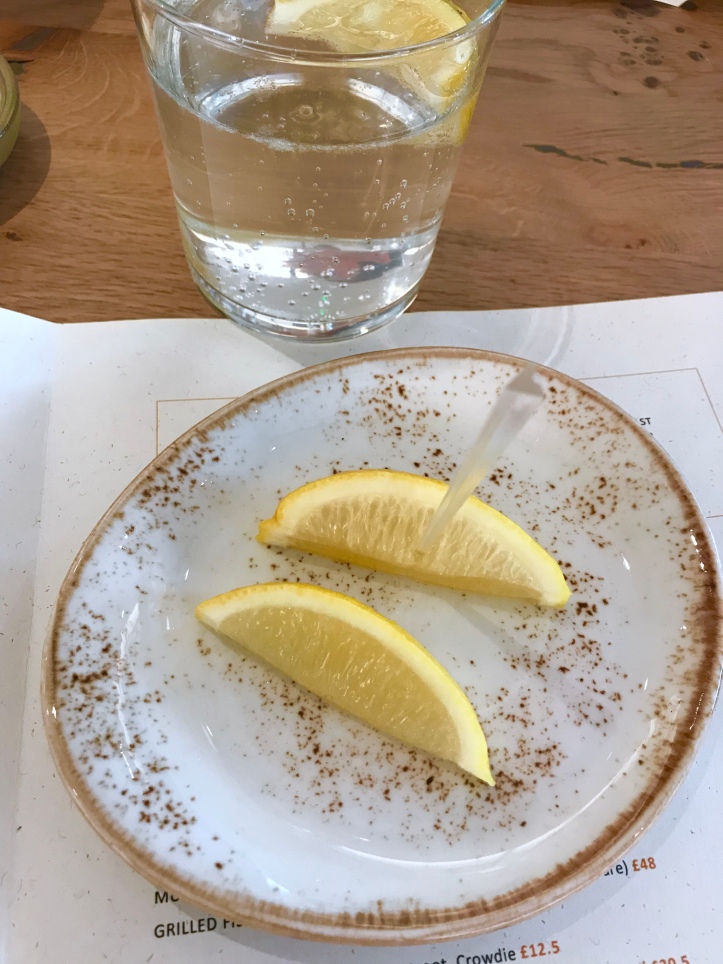 We first opted for some of the appetizers. Leafy radishes with black olives, pickles and blue cheese and lobster crumpet toasts. 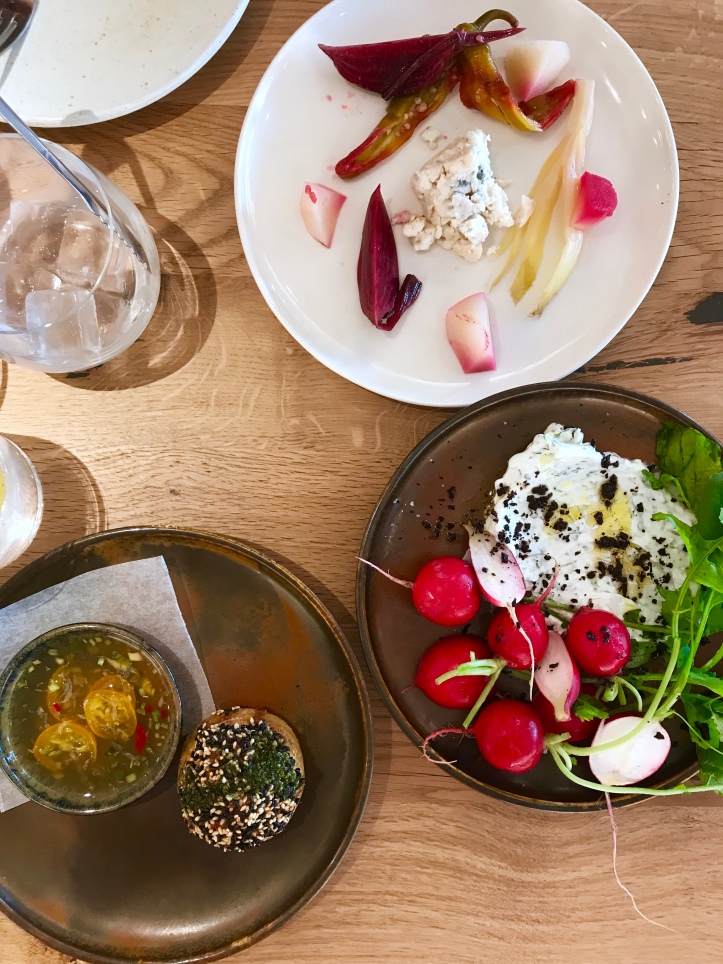 We loved the pickles and blue cheese.  Interesting but super simple.  Strong blue cheese which wasn’t overpowering with the sharp pickles to cut through.  It was really good.

The radishes were fresh and crunchy but the yogurt and olive tapenade it came with was a bit bland.  The lobster toast was a sin against cookery in our view.  It was basically a prawn toast so you couldn’t taste or even see any lobster.  Such a shame I thought and slight waste of a delicate ingredient. 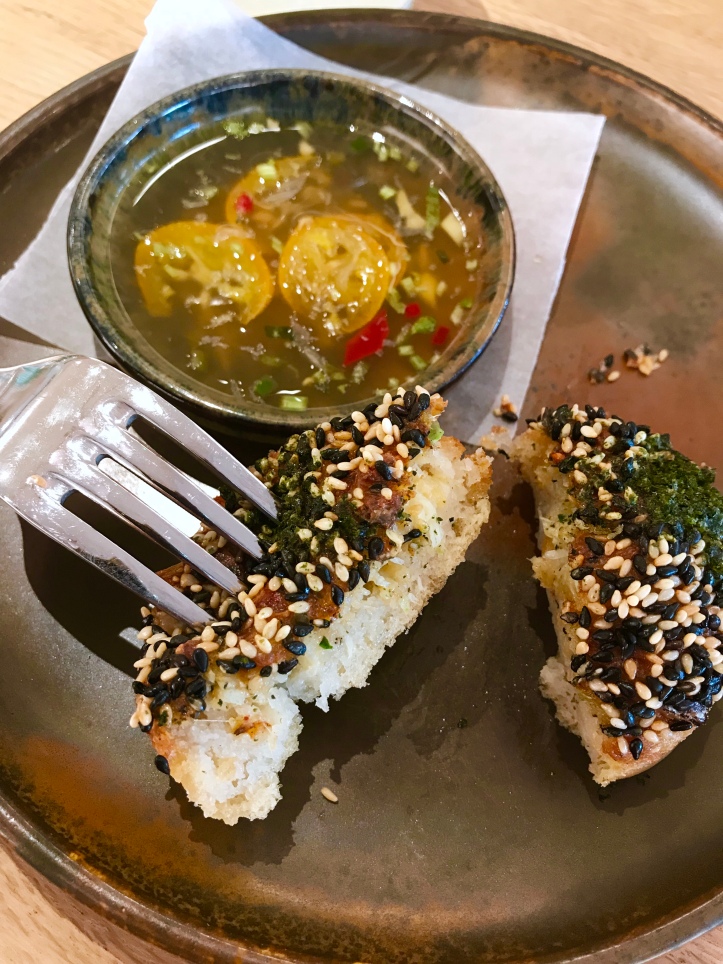 We then moved onto some small plate starters.  Hot tomatoes with yogurt and chilli.  Gerlot onions with whipped feta and green gazpacho, Peas broad beans chilli and garlic and the celeriac shawarma with bkeila and fomented tomato. 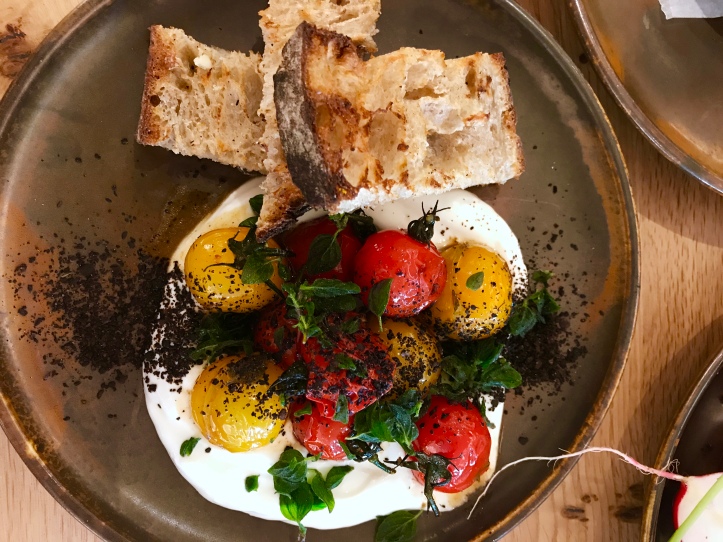 We both loved the onion dish.  The onions were small sweet savoury bon bons with a bouncy dash of feta.  The long stems had been cooked down so some bits were soft and others crispy and textured. It was great. 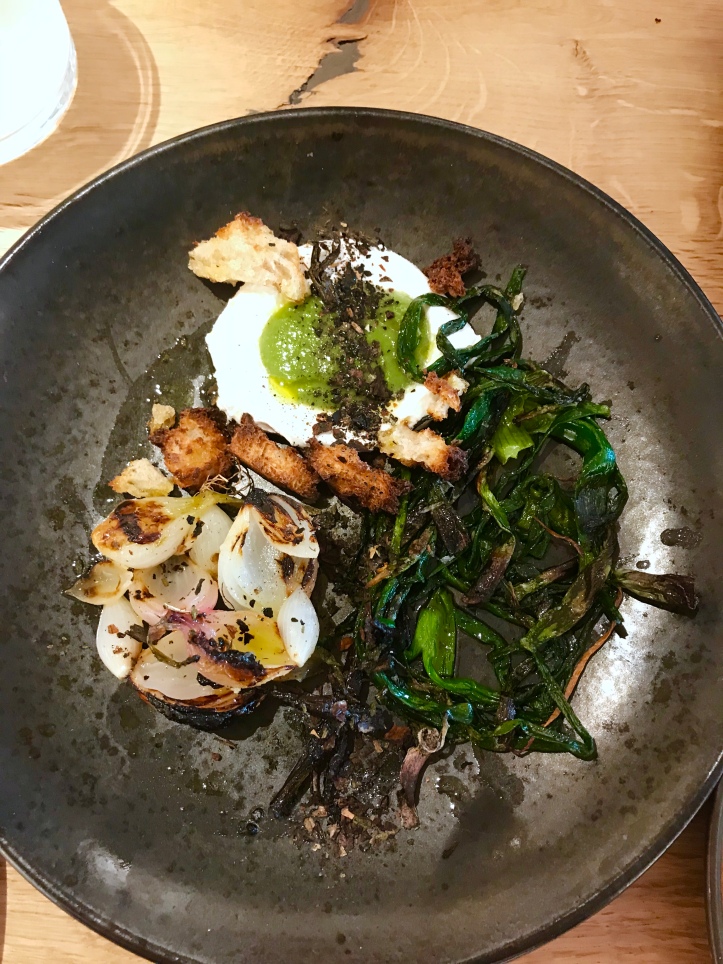 The celeriac shawarma looked immediately impressive but just a bit tricky to eat.   However the celeriac was soft and sumptuous and the sauce had some oomph in it in terms of spice which was very pleasing. 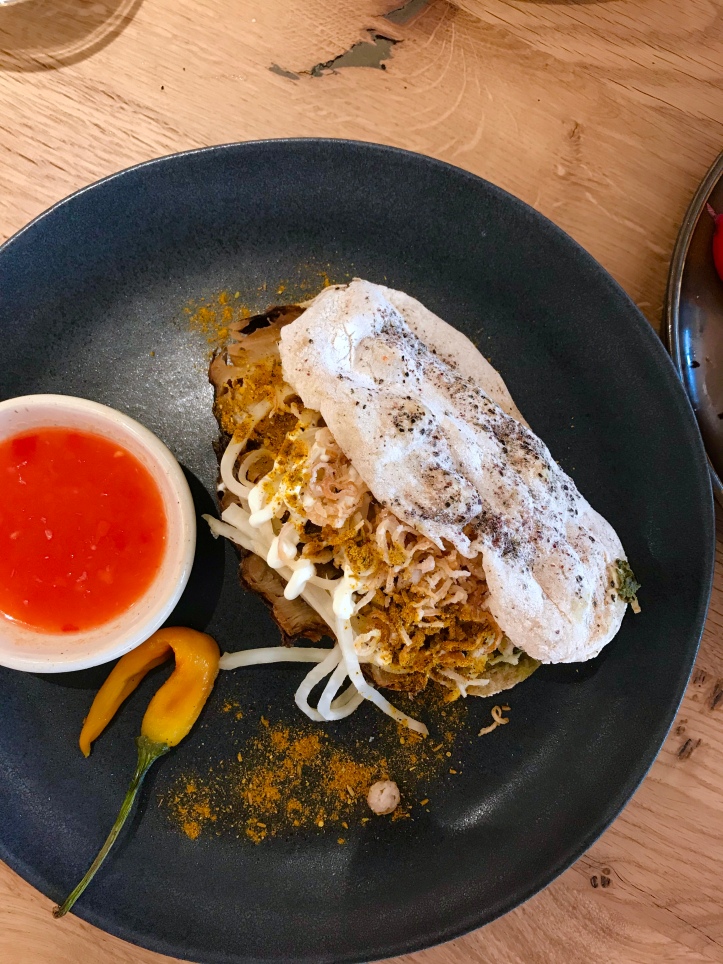 Other than that though, I wasn’t overly enthusiastic.  The tomatoes were good, but quite bland and the peas and broad beans were a bit greasy and just a sloppy ‘new take’ on a bowel of edamame.   We actually didn’t even eat the beans and the waitress scurried over to ask if there was anything wrong, which we said obviously not, it just wasn’t our favourite of the dishes. 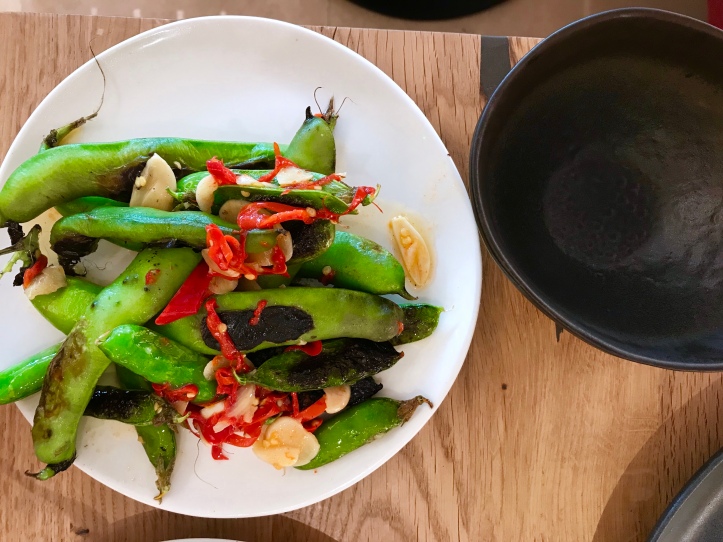 Everything just needed more fire, more pizazz, more guts and gumption.  It all seemed slightly limp on the palette.

We then got (at an eye watering £48 for two to share) the grilled fish, scotch bonnet sauce and corn flatbread.  For a start when the fish arrived the waiter said, ‘Here’s your monkfish”.  Monkfish it certainly was not but it was a white fish of some sort (not sure what). 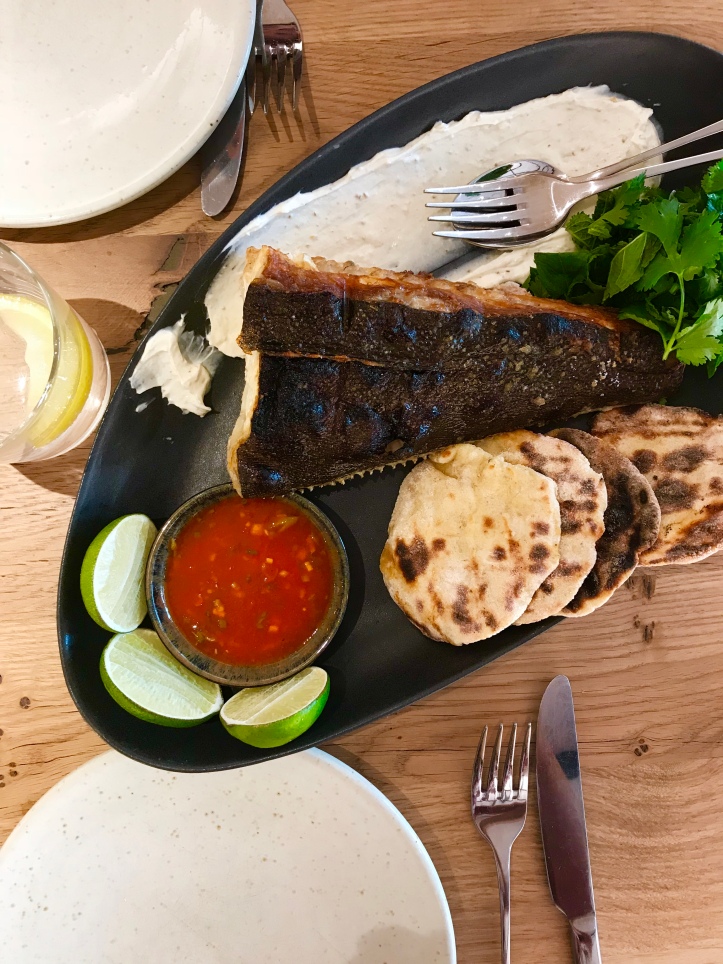 Again, not overly exciting.  It was a ‘build your own taco’ sort of thing which I really like in terms of concept but the execution just wasn’t there.

The fish was overcooked and it seemingly came with the exact same yogurt dressing that we had with the hot tomatoes and the radishes.  Also, when you read ‘scotch bonnet sauce’ you expect some fire.    This was more like a faint night-after candle of warmth on the top of the mouth and it was expensive for what it was.  The flatbreads were too thick too if you were supposed to roll up filling inside and there were not enough of them.

Jimmy also ordered the Jerusalem mixed grill (which we didn’t need as we had ordered alot thus far).  Chicken, chicken livers & hearts with bahart onions and pickles.  Jimmy said and I quote ‘well cooked with interesting spices.” He really enjoyed it. 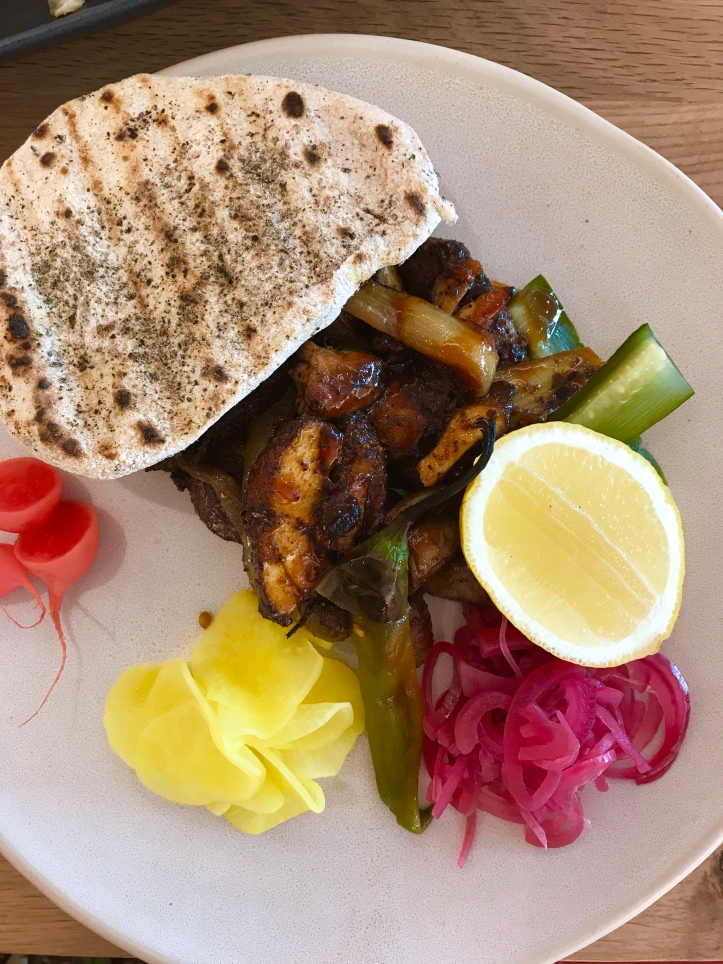 We didn’t order pudding as we had over ordered on the main plates and we were keen to walk into Soho and get a gelato from Gelupo. (I should have taken a picture of the puddings though – i keep forgetting to do that when I don’t order it)

My lunch was not as good as I thought it would be which was disappointing. I so love Ottolenghi and his recipes, and he himself and his general outlook on life. He’s had an interesting one.

I listened to his BBC Radio 4 Desert Island Discs not so long ago and I loved his gentle intelligent but unique swagger.  Even his taste in music was worldly but stylised like the glasses he wears.  He was just cool.   He is cool and so is Rovi.  Rovi made me feel great on entrance only to gradually bring me back down to reality after a few plates and leaving feeling a bit disheartened.

So, I guess old Charles Dickie was right, you have to take the good with the bad, the hope with the despair and the light with the dark – or just call on my builders and they’ll replace the light switches…after they do mine of course!