***Note to readers*** I had been in Bali for 5 nights when I wrote this.  Sadly due to island living and little wifi strength I was not able to upload any posts and images.  Now I am back in Blighty and back up and running!

A few nights ago on a recommendation from my friend in case of ‘emergency Jetlag’ was to download the documentary film called ‘Becoming Warren Buffet’.

I’ve never watched an interview with him or even heard him speak before but he really is just a completely calm, nice average man who just happens and happened to love and be good with numbers.  He seems intrinsically happy too and actually, this has nothing to do with his fortune (as it seemed to me) but only that he lives an almost mindful life without realising it.  Being happy with and recognising simple pleasures on a day to day basis and humbly rewarding himself.  Case in point – he will buy a McDonalds breakfast every day.  However, he won’t always have the over $3 breakfast.  If the markets are not good he will only allow himself the $2 breakfast.  He keeps the exact change in his Toyota Prius which his wife gives him every morning as he leaves the same house he has lived in since the 50s (incidentally the first house he ever and has ever bought, kinda cool for a man who’s worth $67B!)

On reflection of watching this documentary one thing that has seemingly stuck with me were 2 rules which Mr Buffet’s mentor first taught him upon entering the stock market.

This got me thinking about where we had lunch in Bali earlier this week.  A new Restaurant and Beach Club that has only been open 4 months called Ulu Cliffhouse.

Located on the cliff edge of the south western peninsula of Bali called Uluwatu this beach club restaurant had ‘funky’ vibes which however weren’t exactly to my instant taste.

Due to the preparation of the ‘Rip Curl’ closing party for all the surf dudes and dudettes that night, the place was abundant with branding signage for the loos, sponsorship, DJ posters etc. This was slightly off putting on first arrival.  It also very much championed the Ibiza clubber vibes in its general aesthetic.  With huge flashing lights, day beds (which you could eat at) and 2 bars at either end it was totally for the day drinker, poser, instagram selfie sticker.

It just didn’t have that instant Balinese charm I personally would always be looking for.  However, it was a beach club so, why should it?  That’s certainly was not the market it was tapping into, but it quickly and easily brought me to the assumption that the food just wouldn’t be good.

How wrong I was.

We were greeted by very friendly staff and shown to our table and I instantly looked at the menu.

Wow.  So many things I love to eat.

Calamari, Spicy tuna ceviche, red snapper, not to mention an array of delicious salads of beetroot and avocado.  However, the menu spread  further to chargrilled meat, fish, braised octopus…I mean literally there was something for all, but in a legitimate way and not an over compensating one.

We ordered an array of plates to share.  Starting with crudités which were as delicious as they were colourful.  The dips were zingy and tangy.  Amazing. 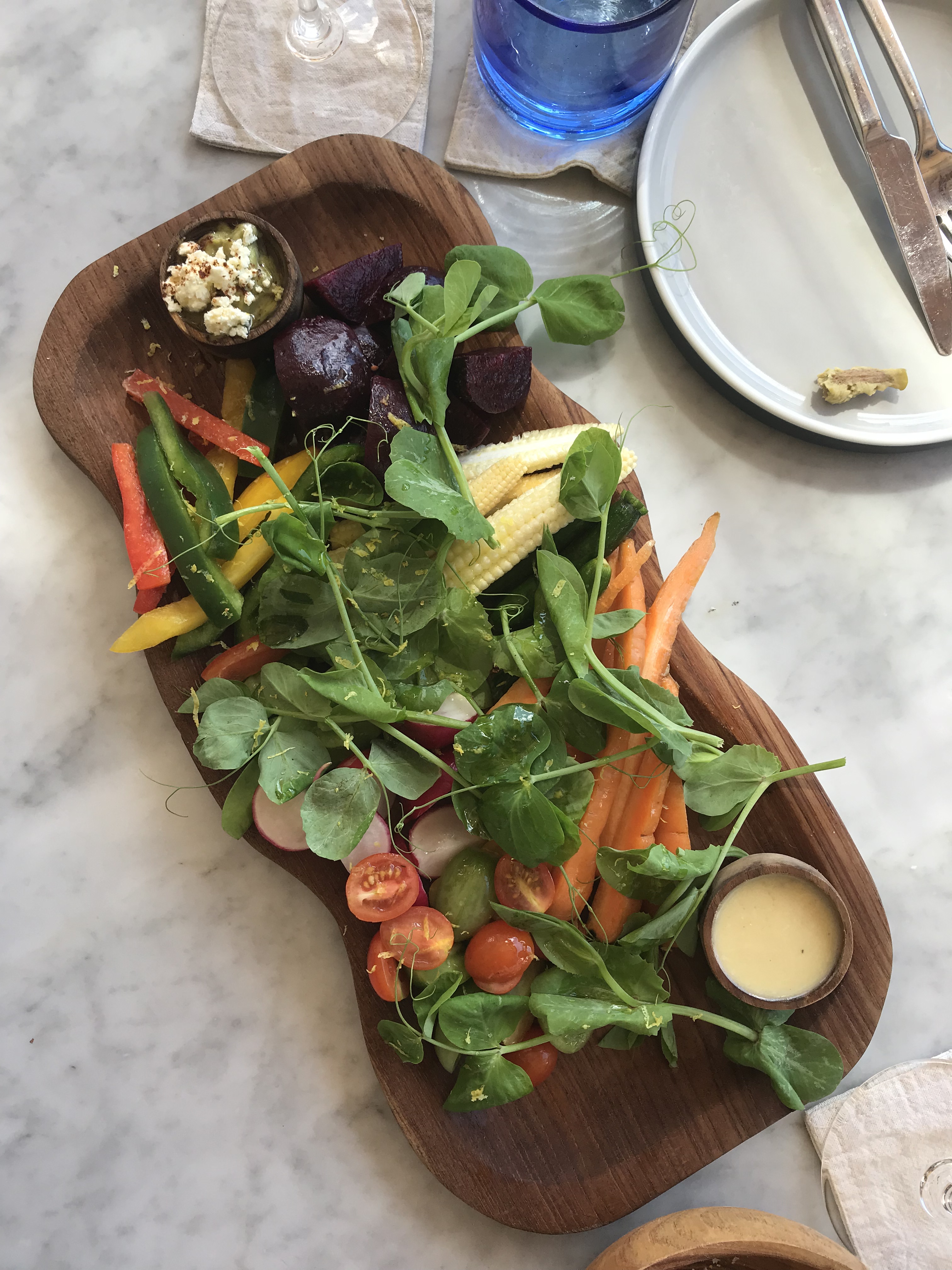 We then had the spicy tuna ceviche with tamarind, and the Shrimp and avocado.  Both were literally to die for.  I spent time in Mexico a few years ago and this ceviche was definitely up there with the some of the best.  They had pickled cucumber on the tuna ceviche which gave it such a refreshing texture. 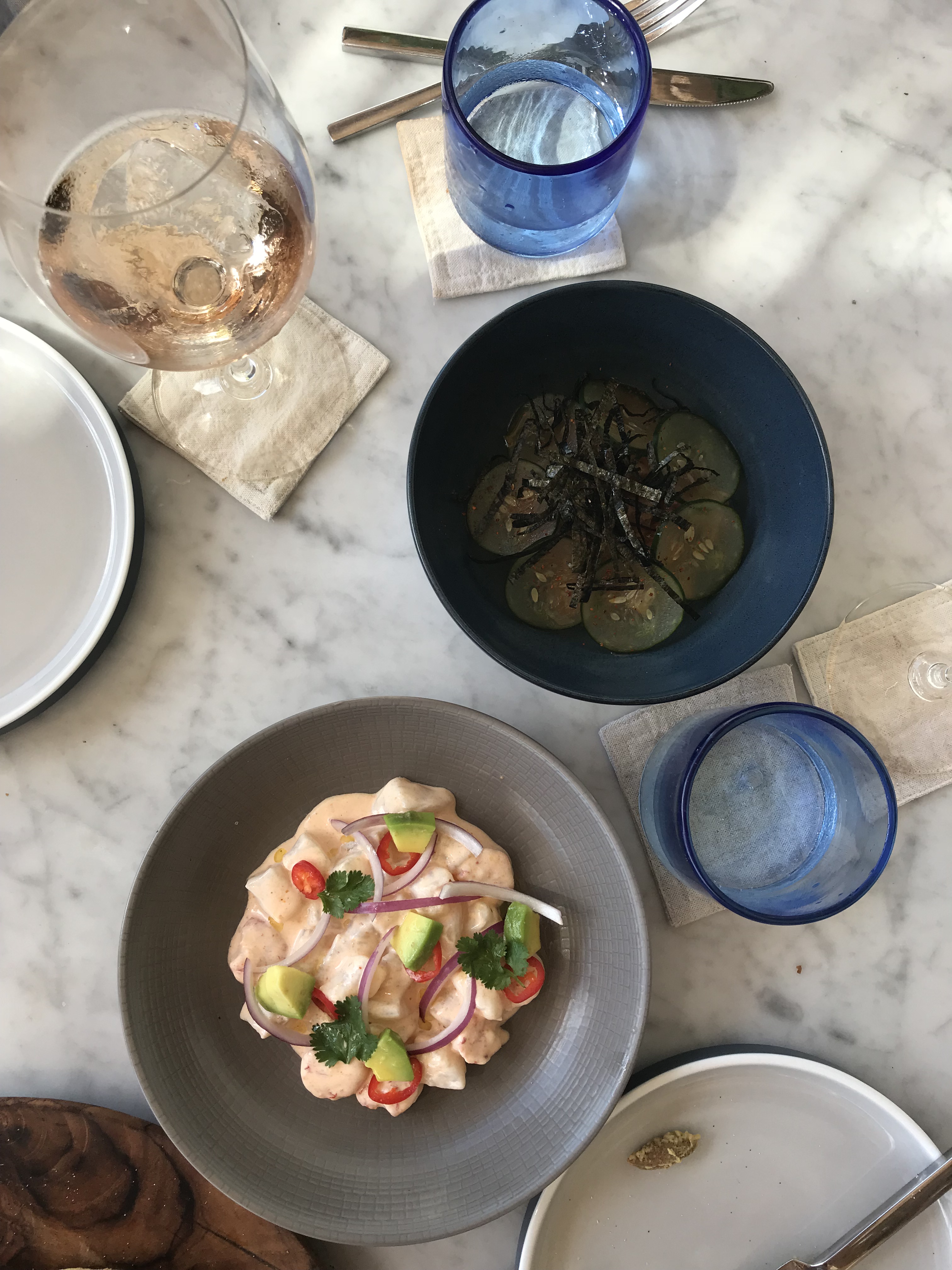 We then opted for a Cobb Salad and a Beetroot and Feta salad which were light, crunchy when needed to be, and had fresh flavoured dressing.  Awesome. 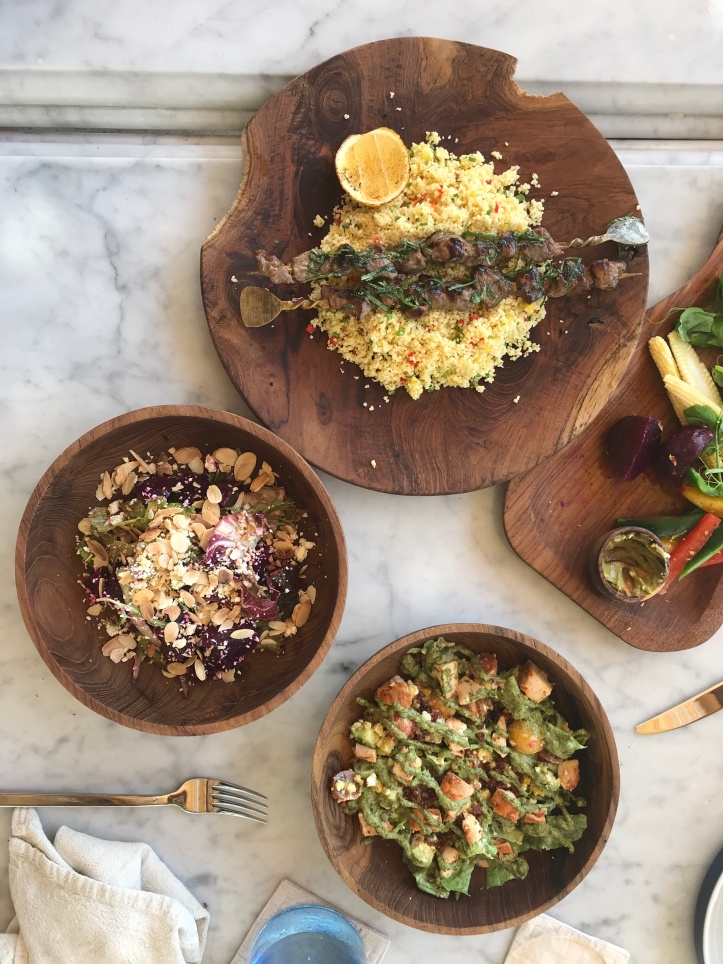 My highlight though was the Guacamole.  I haven’t seen anything quite like it.  The crushed avocado was underneath a cake wheel of different textures.  Crispy bacon, charred corn, quinoa, pumpkin seeds, light cheese, onion – the works.  You could either mix it or just pick and choose.  It looked so beautiful as well.  All I kept thinking was “I wish Jimmy was here to taste and see this” (sadly he’s not/was not here with me on this trip)

One dish we ordered was a puffed-up pitta bread which I hadn’t seen puffed up quite to that extent before.  The humus and roasted tomatoes they came with were sweet, spicy sharp, everything you could want for a taste explosion.  The tomatoes were so sweet (in a good way) we actually thought they could have been roasted grapes (which incidentally I think could be good with pork??)

We also ordered skewed lamb and beef ribs which were succulent, well cooked and all round winners.

Sadly no pudding this time and its totally damning I didn’t take a picture of the pudding menu to show you all.

Ulu Cliffhouse was and is my first ever proper dining out experience in Bali, and what a gastronomic experience.

After eating the food I didn’t mind about all the other ‘stuff’ which was going on around me.  I had a delicious lunch, and a delicious view and with Mr Buffet ‘s mentor in mind maybe I have come up with 2 rules of my own when it comes to restaurant reviews;

There was an error retrieving images from Instagram. An attempt will be remade in a few minutes.